If I have done any deed worthy of remembrance, that deed will be my monument. If not, no monument can preserve my memory. – Agesilaus II

For what it’s worth …

This weekend I was in the desert in Utah having a look at some ancient petroglyphs and pictographs. (= pecked into the rock, vs. painted on). 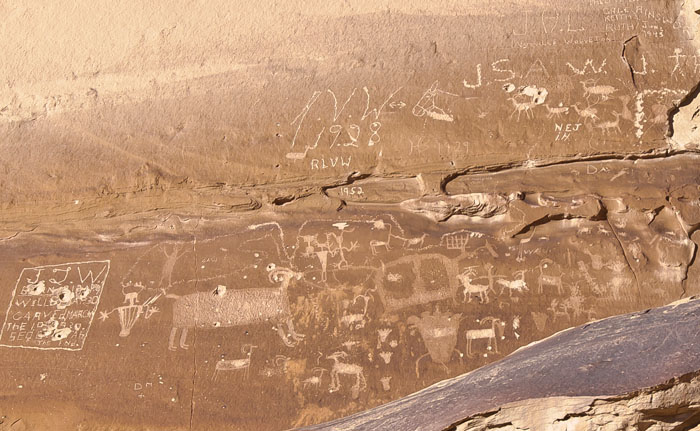 Archaeologists have concluded that the marks on the rocks in this particular canyon cover many periods of human occupation. Comparing these designs to others throughout the Southwest, they assess that the oldest might date from as long ago as 6,000 B.C., from the Archaic period through the Barrier to the Fremont and Ute, and the newest, well that’s not hard to guess, because it says it right on the rock: “Jan 1, 2012.” (That’s most likely “A.D.”)

It’s hard to imagine that some of the images or markings or designs have been there for thousands of years, and still seem fresh and bright and fascinating. (Dry air is good for something, at least.) Some of these designs may be older than the pyramids in Egypt, the Hanging Gardens of Babylon, and Stonehenge. Nothing near as old as the Chauvet Cave in France where Werner Herzog shot his new movie, “Cave of Forgotten Dreams,” and the art isn’t nearly as realistic or emotionally compelling to my 21st century eyes, but it’s impressive nonetheless. 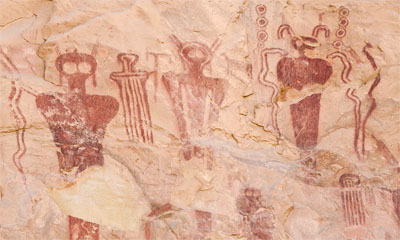 Now, we know very little about the people who left the first marks on these rocks, and we can only guess what the marks meant. Archaeologists speculate — they do what scientists do. They propose a theory, and see if if fits all the evidence. I have an archaeologist friend who has studied enormous numbers of petroglyphs near where I live. After years of study and speculation, she developed a trusting relationship with a local Ute leader and medicine man, who took her around and gave her his explanations of what they meant. A combination of oral tradition passed down from generation to generation, and probably a bit of guessing on his part — but it fit better than any previous explanations she had come across. Still, whatever the ancient work said to the people who created it, we really can’t know.

And, then there’s the new stuff. In fact, while I know quite a lot about the society that left these more recent markings, starting in 1881 and continuing to a few weeks ago, I know very little about what the newer markings actually meant to the people who created them. Who was J. L. W., born in what looks like 1912? And did JLW turn 18 on April 30, and did he or she carve an inscription him- or her-self on March 10th 1930? And why did JLW need to say the carving was done in Sego, Utah, since it wasn’t likely to be going anywhere else? And then to finish up with “ThE ENd” and put a box around the whole thing! Brilliant! But who came along after it was carved, and shot bullet holes in it? And why did Norville Wolveton (did he spell his name correctly for all of posterity?) give a full name, while AVW in 1928 and RLVW in 1952 didn’t? And what do we know about Gale, Keith and Ruth Ainsworth, whose names appear in two different panels, other than that they didn’t think ahead enough to start inscribing in a place where they’d have enough room to fit in their last name without curving and scrunching it?

Before I go on, I want you to know that I have a basic assumption about humanity. People don’t really change much through time. Oh, individuals change, absolutely. Year to year, decade to decade, sometimes even minute to minute. Everybody changes. And, there is enormous variation from one person to the next, as well. Anyone who says, “people are all basically the same,” just isn’t watching very closely. Yeah, there are certain commonalities, but there are also vast and crucial differences. Perhaps not as much as it seems in an election year, but there are so many types of people, we’ll never be able to catalog them all.

But when I say people don’t really change, I mean that if you find what someone is like today, there was probably someone just like that a hundred years ago, and a thousand, and ten thousand. And if there are a lot of people that are a certain way, then there probably were a lot of them back then at any time you could pick in the past. 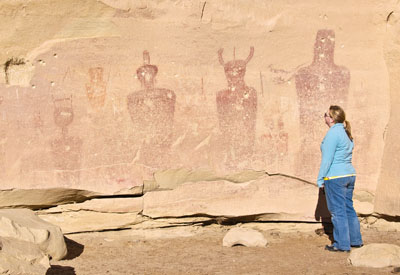 So once I got past the shock and horror at the defacement of these ancient messages, I got to wondering. Were the people who put those marks in Sego Canyon five hundred or six or eight thousand years ago anything like the people from the coal mining town in 1908 or the visitors like myself in 2012? Were they the same kind of people in their societies? Were they different? What motivations might they have shared? What motivations might have been completely opposite?

It’s very tempting to imagine that ancient peoples were somehow more noble than modern ones. I think we tend to imagine people sitting around their fires centuries ago, watching the “great ones” pecking away or painting on the rocks, in the midst of religious or cultural ceremonies. Like Maya Angelou and Stevie Wonder and Yo-yo Ma at the presidential inauguration. We imagine that their society selected the best, most talented, most wise. Then commissioned them to represent the tribe or the nation in making creations destined for the ages.

On the other hand, we tend to imagine the more modern “graffiti” or “vandalism” being done by less-educated, boorish, drunken rednecks on a moment’s whim. “Eh, Bubba! See them Injun pictures over there? What say we give ‘em some new eyes, courtesy of Smith & Wessen? Heh, heh!”

I don’t really know. I’ve never talked to someone who admitted they had done it, though I’ve known a lot of people who have found arrowheads or ancient tools and slipped them into a pocket or daypack to keep. I’ve found myself tempted. I’ve never done a search of the scientific literature on vandalism, and I’m not sure how confident I’d be in the conclusions, anyway.

I think the purpose of life is to be useful, to be responsible, to be compassionate. It is, above all to matter, to count, to stand for something, to have made some difference that you lived at all.

Maybe our stereotypes are right. Maybe the ancient ones said, “I was here” as a community. Maybe their designs represent important moments in the life of the community or tribe that seemed rare, and worthy of memorializing. Maybe the more recent signs are from people who were not leaders in their communities; they weren’t going to have libraries or schools or bridges named after them; they didn’t know how to leave a lasting legacy any other way. Maybe they really were drunk or impulsive, and when that longing to show that their lives made a difference, they simply grabbed a gun or rock and started shooting or pecking.

Or maybe that sort of impulsiveness is where the surviving ancient “art” came from, too. Maybe the great, communal art back then was as temporary and fleeting as a sand painting, and it was only the crudest, lowest class, impulsive vandalism that survived. Maybe the tribal leaders were just as horrified to see the rocks in their time defaced by what we now call “rock art” as some of us are at gang “tagging” today.

And what about respect for what’s ancient? For one’s elders? For the wisdom and grace of the ages? From what I’ve seen, even though ancient “art” panels often contain images and markings spanning millennia, until recently, what was already there was rarely destroyed, just added to. Did ancient tribal peoples have more respect for what had come before? Or is there a new need to define ourselves–to demonstrate our identity. Maybe the ones who shot bullet holes into thousand-year-old art wanted to say, “That’s not my art. They’re not my people.” Maybe the ancient art helped define tribal identity, and scratching over them was an act of defining identity more recently.

But there is a difference, you’re saying.

Yes, there is. There is a difference between selfish acts that serve only the gratification of an individual at someone else’s expense, and community actions that uplift the entire community.

We look at bullet holes, and “Phil Edmunds 1913,” and it seems childish and immature. And it is.

The point for me is that we all have all those impulses. We all want to make a lasting difference. We all want our lives to signify something. We all want to know who we are, and state it, show it. We all need to know where we belong and with whom. We want to state who are “our people,” be it a small band or tribe, or the entire universe.

Maturity, on the other hand, is consciously choosing between our diverse motivations and impulses. And that’s something we all can do.

We can decide what impact we want to have, what legacy we want to leave behind, what mark in the sand or the rock or newspaper says, “I was here.” 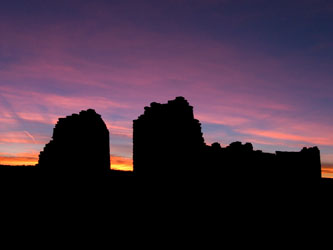 We can choose what to have respect for — whether it’s ancient ways or modern, religious or secular — and when to say, “THIS is worth preserving.”

We can choose to believe and follow our leaders, our wise ones, our predecessors, or we can conclude that our own opinions have more validity than anyone else’s.

We can choose our identities, how we define who we are.

It’s the choosing, the conscious awareness, what I call “the Intentional Life,” that represents maturity.

I can’t say just how mature Gale and Keith and Ruth Ainsworth were. But I can try to be mature myself. So I’ve chosen a medium that may last a million years, or may be gone just by pressing the wrong keystroke. How about you? How will you say, “I was here”?

… at least that’s the way it seems to me.