Quote of the day:

A few minutes ago every tree was excited, bowing to the roaring storm, waving, swirling, tossing their branches in glorious enthusiasm like worship. But though to the outer ear these trees are now silent, their songs never cease.
- John Muir

What if we could hear the trees? I mean, really hear them.

Not just the sound of the trees. What if we could listen, feel, and know what it’s like to be a tree. To be this tree. Or that tree. What if trees have consciousness, awareness, SOULS? What if we could hear what they’re thinking and feeling and noticing?

This morning, I sat looking up at the Digger Pines and oaks and chemise and manzanita on the ridgeline above me.

And suddenly, it was as if I knew what they were saying. The trees! They were excited from the wind, almost giddy. Like surfers when the surf is up, or skiers on a powder day. They were alive, envigorated. You might expect them to be shutting down for the winter, but no, they’re looking forward to it. Especially the pines. They’re laughing, eager for the season of storms.

A sycamore by the building looks healthy, but it feels trapped, like a wild animal in too small a cage at the zoo. A buckeye nearby, insecure about its position and future, is obnoxious and pushy, growing whatever direction it feels like, without noticing what its neighbors think or need, or what its impact is on them. Under it, a live oak feels undervalued, invaded and abused, but doesn’t want to say anything or do anything about it. Like the old claim about how many Jewish mothers it takes to change a light bulb. (None. “That’s alright, dear, I’ll just sit here in the dark.”) A live oak with low self-esteem, you understand.

I’m sure some of you, my beloved readers, listen to trees all the time. And some of you think I’m just making it all up. Projecting. Anthropomorphizing. Giving human sentiments to “inanimate objects.”

Do you know what “inanimate” means? “Without a soul.” 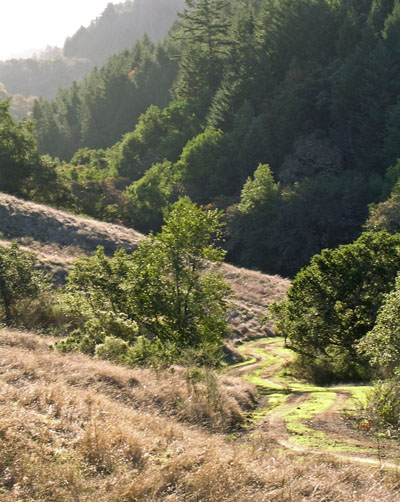 How would we know?

But it turns out that crows can make tools. Gorillas and chimpanzees can make sentences. Cats can get embarrassed. Golden Retrievers get their feelings hurt. Lots of animals engage in homosexual acts. Bees do multiplication. Parrots in the wild tell lies.

Dolphins seem to communicate with each other using frequencies too high for us to hear. But even if we slow it down, we don’t know what they’re saying. Giraffes make sounds too low for us to hear. Whales can communicate over thousands of miles, and sing the same songs in different parts of the ocean. Farley Mowatt claimed that old tribal people in the sub-arctic could translate wolf howls to learn where the caribou were gathered, hundreds of miles away.

So why not the trees? And the other plants, too. Grass is totally absorbed with growing. That’s what it does. By the billions. No attention left for what’s going on around it, except water and sun. Meanwhile, in Costa Rica, I saw orchids so small you can only see the flowers with a magnifying glass. They’re the “Old Souls” of the plant world. Mystics. Patient; noticing; aware of the world, but more interested in what lies beyond. 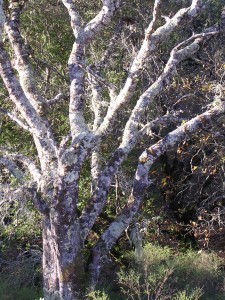 And where do we draw the line? Maybe the rocks are alive, too. And if they’re alive, maybe they have consciousness. Maybe they live and think and feel at a time frame too slow not only for us to hear or measure, we can’t even imagine it. Yet.

Is your identity shaken yet? Probably not. Most of you know all this already, but it’s good to be reminded from time to time, I hope.

But other people find this idea very threatening. [So do geese and blackberries and breccias, but that's another story.]

You are who you are. You don’t have to be best, or most, or only. You don’t have to be a doctor or a parent or straight. You are not defined by what you do or don’t do, your status in life or your relationships, or how much money you have or what yoga poses you can do, or how sexy you are.

You are just you.

When you come to terms with that, then you can listen to the trees and the orchids and the waves and the mountains.

And then, when we’ve listened to all the things that are not “us” — when we learn what it’s like to be them — then maybe, just maybe, we’ll be able to listen to each other, too.

What if, what if, WHAT IF I could hear you, and you could hear me? And then we did it? And people knew what another is thinking and feeling and saying and noticing. People knew what it’s like to be someone else. Someone not like them. Someone speaking on another frequency, from another ecosystem. What if?